A good luxury sedan should be as quiet and as comfortable as possible, sportiness be damned. That’s why when I first drove the Volvo S90 back in 2017 we absolutely loved it. It’s Volvo’s uncompromised flagship luxury, and at price that undercuts the Germans, what’s not to love. Four years later, we gave S90 another try to make sure it’s still as good as we remembered it. This is a top of the line 2021 Volvo S90 T8 Inscription. 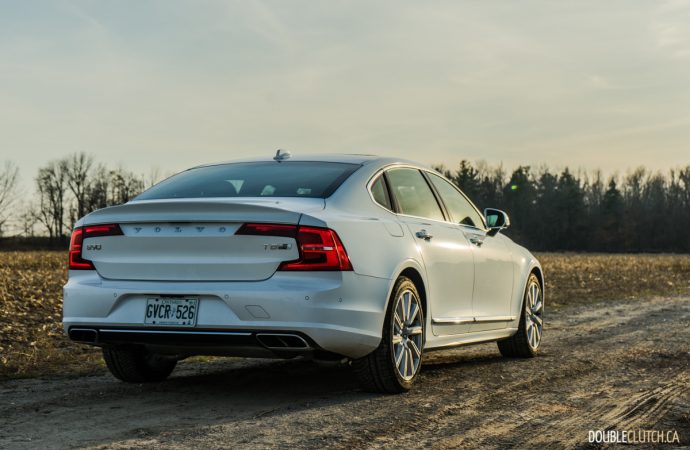 The S90 certainly looks the part of a luxury flagship from any angle. Long, low, swooping lines, perfect proportions and impeccable exterior fit and finish make it a very elegant car to look at, in an understated way. The S90 is only available in top of the line Inscription trim so all models come with upgrades such as subtle skirting and a touch of chrome trim. Our tester came with the standard 19-inch wheels, and finished in gorgeous Crystal White Metallic. The S90 has luxurious presence, without looking like it’s trying too hard, a rare find these days, but one of the reasons we are such fans of the car.

The story inside is no different, where the same luxury, attention to detail and refinement from the exterior is carried into the interior space. This is a fantastic car to turn a long commute into a relaxing treat. As expected from Volvo, the heated, ventilated and massaging perforated leather seats are extremely comfortable. The low slung driving position helps prevent fatigue, and quite literally every control button, switch or knob feels great, right down to the aluminium twist knobs on the individual air vents. 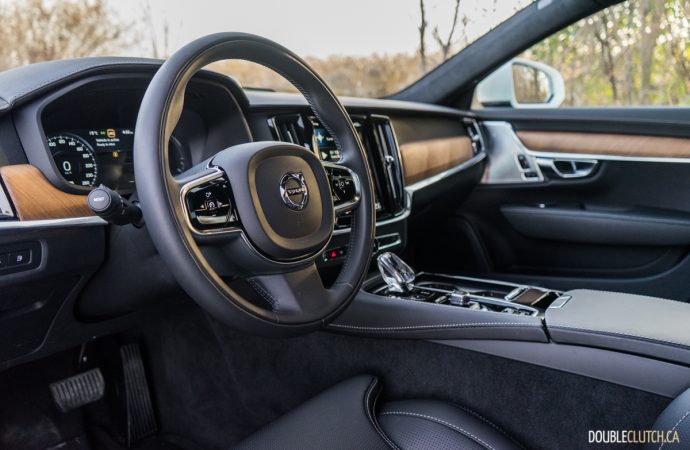 Our test car came equipped with the Luxury package ($3,650) which takes an already upscale interior and really puts it over the top with ventilated rear seats, the massaging front seats, Nubuck headliner leather wrapped sun visors and grab handles, and a fancier rear center console. From a practicality standpoint the interior scores well thanks to its favorable ergonomics, and tons of room for both front and rear passengers to spread out.

One gripe is that there is not a ton of handy space to keep daily carry items up front. The cup holders in the center console are a touch small, the under armrest storage is non-existent, the glove box is on the small size, and even the door pockets are a little tight. If you don’t carry much with you, it’s a non-issue, but if you carry a bunch of stuff everywhere you’ll quickly run out of convenient and secure spaces. 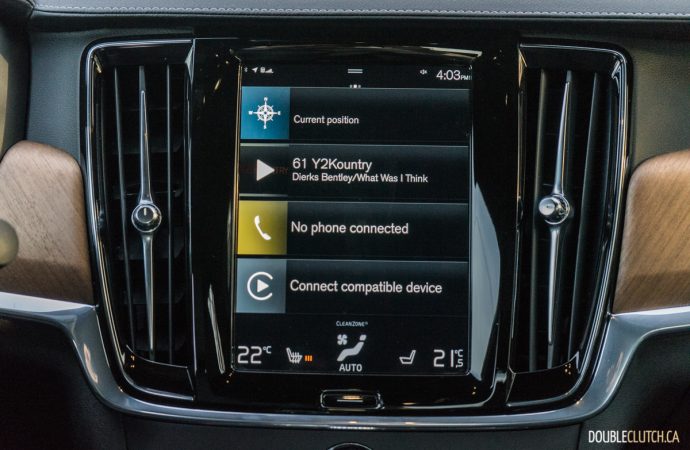 Volvo’s Sensus infotainment system is another plus for me; it looks and works similarly to an iPad with the ability to swipe for different menus. It offers crisp graphics, minimal lag-time, and is fairly easy to pick up on the fly. Our tester got the optional ($3,750) Bowers and Wilkins sound system and it’s phenomenal – definitely one of our favorite stereo systems to date.

The Volvo’s grace goes beyond skin deep as well, and while the standard “T6” engine, a turbocharged and supercharged 2.0-liter four-cylinder pumping out 316 horsepower is no slouch, the engine to brag about is the “T8” equipped in our tester. The T8 takes the standard twin-charged gasoline engine and pairs it up to electric motors (65kW) powering the rear axle, and a plug-in hybrid interface with 10.4kWh lithium-ion battery to power it all up. Together, the system is rated for 400 horsepower at 6,000RPM and an impressive 472 lb-ft. of torque between 2,200 and 5,400RPM. 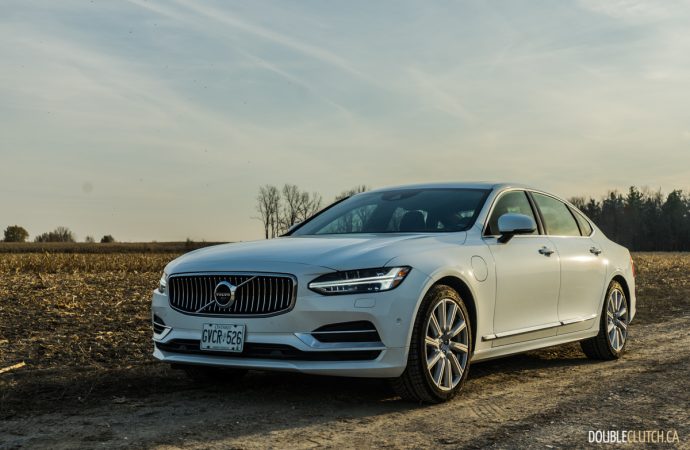 The electric-only range is also very respectable at a rated 43 kilometers,  and there handful of different drive modes which determine which source of propulsion is used most, making it possible to set the S90 T8 to utilize the electric portion as much as possible and minimize fuel consumption. Of course, you won’t get access to the full 400 horsepower with your drive mode set up like this, but if frugal commuting is what you’ve got in mind, itll do just fine.

If speed is more your thing, the T8 has you covered as well. It pulls like a freight train right up to highway speeds. Merging is a blast, high speed passing a breeze, and the 0-100km/h sprint is completed in 4.9 seconds, in the territory of some serious sport sedans. The powertrain, while impressively smooth and refined for the fact that it is a boosted four cylinder with a complex hybrid system, does sound a touch gruff at times. In any other platform that wouldn’t even be noteworthy, but in a flagship luxury sedan the noise feels a little out of place. 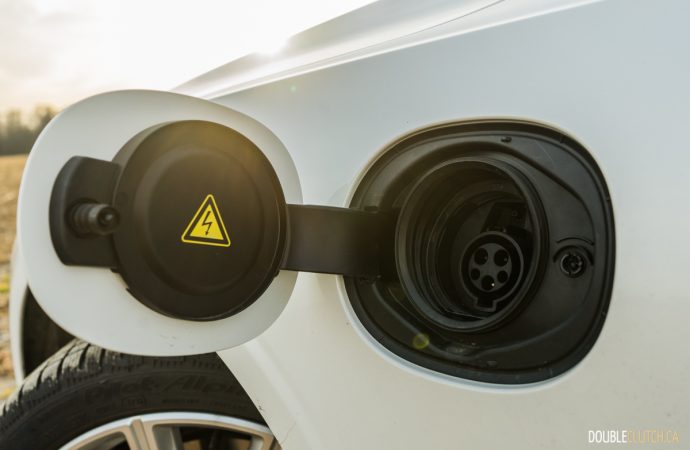 If you’ve got a short commute, or do a lot of stop and go driving, which allows the regenerative brakes to keep the battery topped up, it is possible to get around using mostly just electricity. Plugging the S90 T8 into a standard household 120V outlet overnight was enough to charge the battery up from almost empty – though Volvo quotes a 2.5 hour charge time through its dedicated 240V chargers.

Unlike a true EV, with a plug-in hybrid like this S90 T8, there’s no need for range anxiety since the gasoline engine is always on board and ready to take you anywhere. Leaving the drive mode to its own devices, and spending most of my wheel time in the S90 on the highway, and moving at a good clip, I ended the week with an indicated 7.6L/100km average. This is right in line with the car’s official ratings of 7.1L/100km on the highway, and 8.1L/100km in mixed driving. Of course, it does require 91 octane, and the T8 variant has a relatively small tank at only 50 liters. 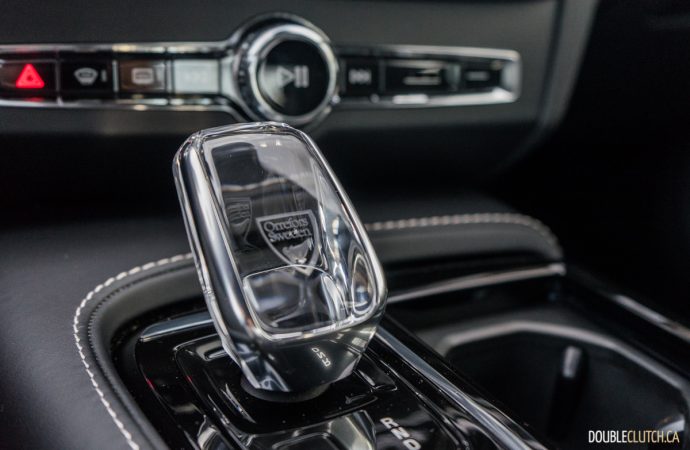 As far as the driving experience goes, the S90 T8 nails almost exactly what a flagship luxury sedan should be. It’s quiet, serene, always composed and ever so relaxing to drive. It’s not sporty, it’s not begging to be thrown around a corner and it’s never harsh, however when you need power there’s plenty on tap. The only let down is the sound of the four cylinder gasoline engine on the rare occasion that it does intrude.

As mentioned, Volvo has done way with the lower trim levels that were previously available on the S90, reserving the car for true flagship worthy levels of luxury only. Pricing starts at $67,000 with the traditional T6 powertrain, and opting for the T8 will cost $74,950. Our tester got loaded up even beyond that with the Luxury Package ($3,650) and Premium Package ($2,900) which adds the heads-up-display, heated wiper blades, 360 camera, heated steering wheel and more. It also got the Bowers and Wilkins stereo ($3,750) and optional rear air suspension with adaptive dampers ($2,390). This pushed the as tested price to $90,765. 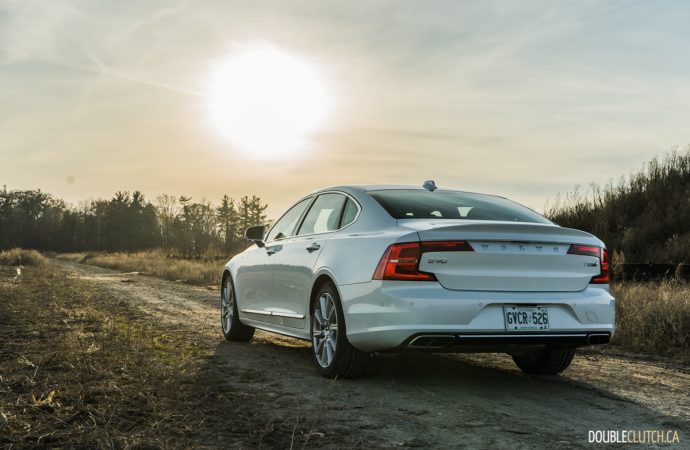 This 2021 Volvo S90 T8 Inscription is the kind of luxury cruiser brands like Cadillac should be building. Never mind the skidpad, show me this level of comfort on the battered 401. It’s livable, and (somewhat) affordable luxury that’s just a fantastic car to live with every day, all while making ever drive feel a little special. If you want a proper flagship sedan, without going over the top, or suffering in the name of sportiness, the Volvo S90 is the correct answer.