The 2021 MINI Cooper S Countryman ALL4 is far from what the “MINI” name used to mean. When the original MINI came out in 1959, it was well known for its compact size and fun to drive demeanor. This continued up to the year 2000 when BMW took ownership of the name and released a version of the MINI Cooper that had retained the most of the character of the original, but in order to meet the needs of buyers, it had to grow in size. 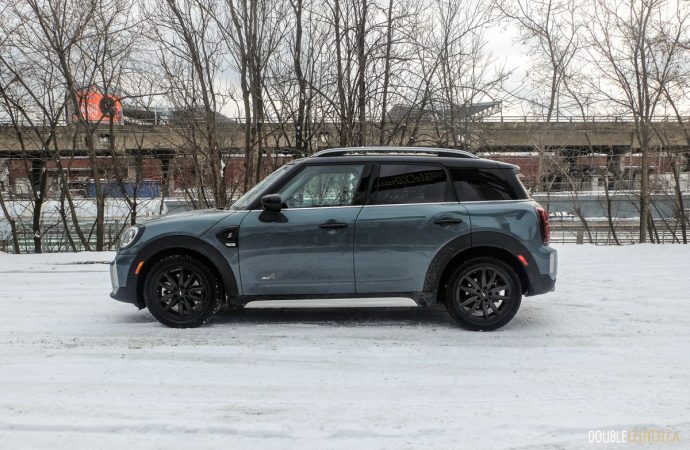 With modern looks, safety and technology, it was a hit for BMW. Twenty years later, the regular two-door no longer the sole model within the brand and their biggest seller is now, big surprise, a crossover. In an ever-changing automotive landscape, this is the 2021 MINI Cooper S Countryman ALL4. Does it deserve to carry the MINI name or is it just another crossover entry that is average at best?

Everyone knows what a MINI is supposed to look like. This is a good thing, as BMW could have messed it up big time. The front end looks typical MINI with large headlights and a bulging hood, and the flat roof line works well with the good proportions. What does look odd on the Countryman is the higher ride height (6.4 inches) and taller cabin.  Tall would be an appropriate way to describe the overall look; it’s not your typical MINI. 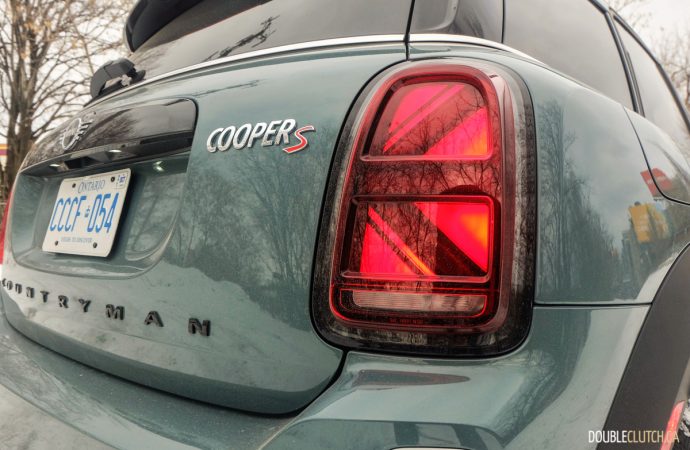 For 2021, LED Union Jack taillights highlight the Countryman’s British heritage. They look great and feel right at home in the little crossover. The optional Piano Black exterior trim replaces the stock chrome treatment that I personally have never been a fan of, and are a much appreciated addition. Inside, a new digital cluster is situated above the steering wheel and provides a clear view of all pertinent information. It’s beautifully minimalistic; no more, no less.

The basic layout of the interior over the years has been retained. A large round center console with screen, retro toggle switches, and rounded climate controls are well within reach and clearly laid out. Dash materials are soft-touch, with piano black trim. Unfortunately, some buttons used throughout the interior feel subpar. The fact that the meaty, high quality steering wheel has these buttons to control the audio and cruise control remind drivers of this constantly. Our tester’s Premier+ package added Carbon Black Leatherette, a panoramic sunroof, a Harman-Kardon sound system and a list of other items. 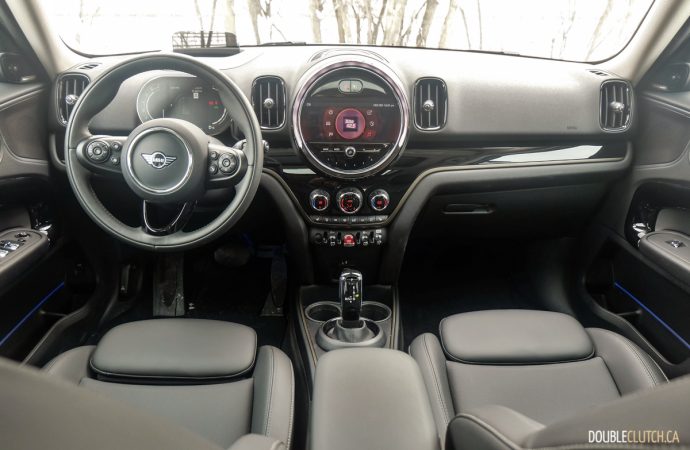 Interior ambient lighting can be changed to various colours, and the bezel around the center screen changes colour when scrolling through or changing the various drive modes. Headroom of course is fantastic with such a high roof line and four adults will fit comfortably, as long as those in the second row are under six feet tall. Shoulder room is more than ample. Loading up 498 liters of cargo is impressive, but drop the rear seats to have this number jump to 1,347 liters.

Driving anything associated with the MINI name should bring some excitement on your daily commute and the Countryman does meet most of these expectations. The 2021 MINI Cooper S Countryman ALL4 handles well beyond most in the subcompact crossover segment and can handle the twisties when asked to. The ride may be seen as stiff to the average user so be warned, but the steering feels good and the chassis is tossable. 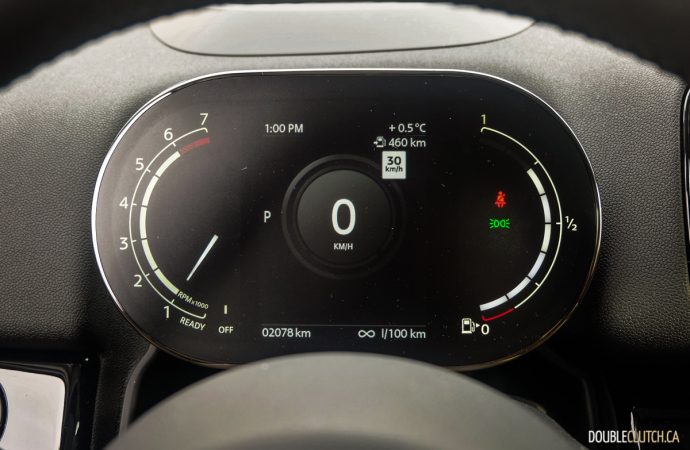 Base Countryman ALL4 models come with a turbocharged three-cylinder engine with 134 horsepower and 165 lb-ft. of torque. The S model tested here ups this to a 2.0-liter turbocharged four-cylinder that pumps out 189 horsepower from 5,000 to 6,000RPM and 206 lb-ft of torque from 1,350 to 4,600RPM. This results in a 0-100km/h run in around 7.3 seconds. There is a hint of turbo lag when stomping on the throttle, it does get a bit louder than expected but the power delivery is smooth otherwise.

The Cooper S Countryman is enough for most people, and certainly feels quicker than the likes of the Lexus UX 200 and Volvo XC40 off the line, but it’s no performance monster. Those looking for more oomph may want to consider the John Cooper Works model with 301 horsepower and 331 lb-ft. of torque. Tree-huggers can also defer to a plug-in hybrid version of the Countryman that’s available in low volume. 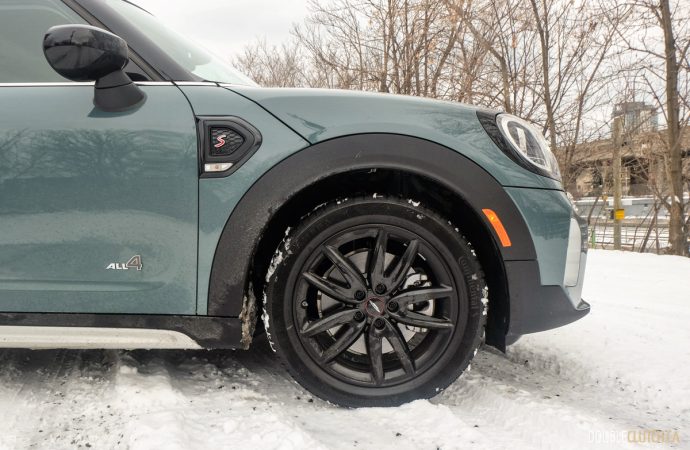 Over our week with the MINI Cooper S Countryman ALL4, I had achieved a fuel consumption rating of 8.9L/100km. Oddly enough, Mini Canada has not released its official fuel consumption ratings at this time. With a 61-litre fuel tank, Mini does require a minimum of 89-octane midrange fuel, and recommends premium 91-octane for optimal performance.

Based on the Countryman’s size, it can be easily cross-shopped with subcompact crossovers such as the Hyundai Kona, Subaru Crosstrek or Mazda CX-30.  However, in truth cross shoppers may compare it to more premium models such as the Lexus UX or BMW X2 that it shares many of its components with. 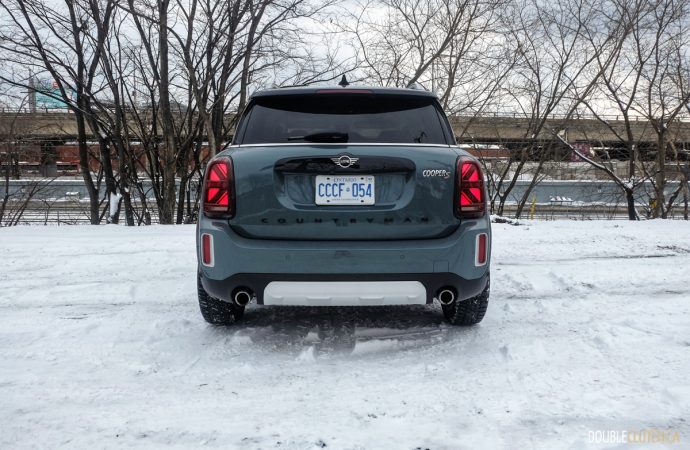 When priced out with the Premier+ package at $7,350, upgraded 19-inch Turnstile wheels at $750, Driving Assist at $1,000, metallic paint at $590, that exterior black trim package at $550, ALL4 exterior styling at $500, electronic front window defroster and performance tires, our $35,990 Countryman came in at a total price of $47,030. At this price, Android phone users have been left out as Android Auto is not available at any trim in the Countryman, while Apple CarPlay is on board.

MINI also sells something known as the Clubman which could also be considered as an option.  This particular model retains the lower stance and roofline associated with the standard MINI but with added length and two extra doors, along with stylish barn doors on the back. The Clubman’s cargo capacity is quite close to that of the Countryman, has the same ALL4 all-wheel-drive system and looks better, with a traditional station wagon stance. 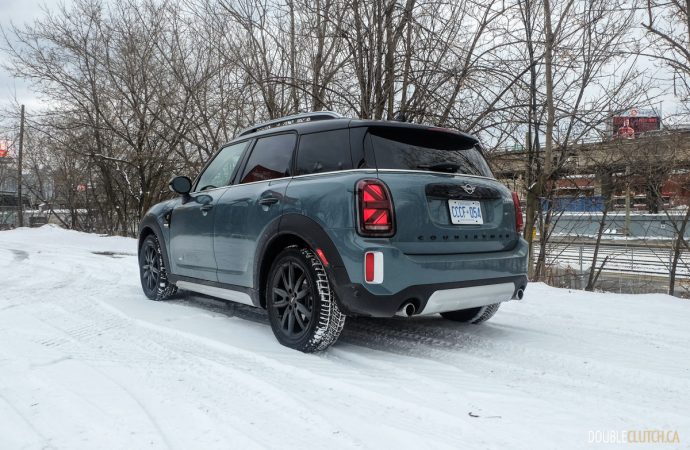 The 2021 MINI Cooper S Countryman ALL4 is a fine option for those that need a small crossover with the added ride height over a traditional car. It has the fun, quirky personality we expect from the MINI brand, and with some extra practicality to boot. The Clubman’s lower center of gravity and sharper handling characteristics are more appealing and would be my choice, if I didn’t need height. If size weren’t an issue, the traditional three-door John Cooper Works model would be the one in my driveway.