Are you going through an identity crisis? Are you questioning who you are or what is your purpose and values? Even if you aren’t, buying a 2021 BMW X4 M Competition may lead to one. In 2014, BMW released their first X4 which was an SUV that is also a sports coupe. The X4 filled the niche market for buyers looking for an SUV in something that didn’t look like one. BMW has always had the reputation of building a car to fill every niche market they can identify. 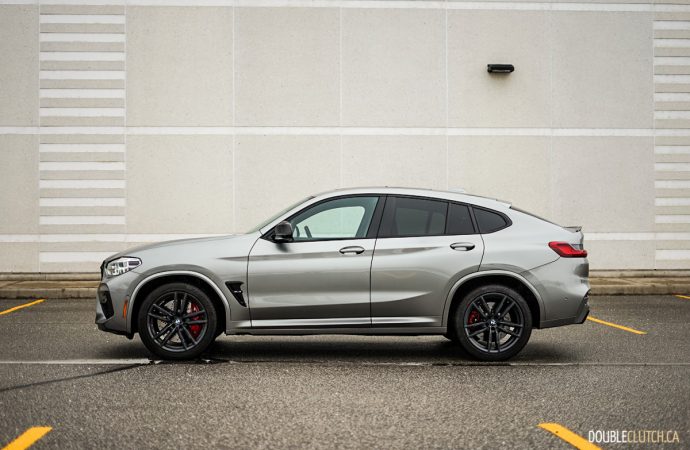 The X4 has been a success for BMW and is now in its second generation. They have decided to make a motorsports-ready version of the X4, and we were excited to get our hands on the fire breathing X4 M Competition. Can the X4 M live up to the M badge considering its crossover underpinnings?

BMW did not want to leave any doubt in the driver’s mind on whether the X4 M is a true M car or a sporty SUV with a badge. The moment you hit your first manhole cover you know this is not your average crossover, with the jarring shock from the chassis. The suspension is stiffer than my own Civic Type R. Even though the X4 M is equipped with adaptive dampers, it rides very stiff even in Comfort mode. The suspension does a sublime job of minimizing body motions despite the size and high center of gravity. This translates to handling capabilities beyond the imagination for an SUV. 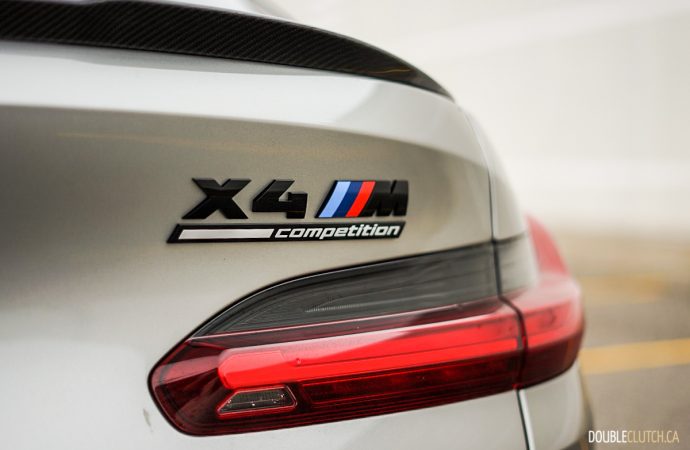 The X4 M will handle more speed in a corner than the typical driver will dare. This is made possible with the implementation of the M xDrive system that first debuted in the BMW M5. The system is a rear-biased all-wheel drive system paired with an Active M differential to split power for maximum grip and agility. Even though the X4 M does not have the M5’s ability to be rear wheel driven only, the rear is eager to come out in low grip surfaces. The powerful M brakes scrub off speed with aggression, allowing the big and tall chassis to still dive into corners with confidence. The obvious downside to the M compound brakes is daily usability; modulating at low speeds can be tricky.

In the heart of the X4 M Competition is BMW’s latest S58 boosted 3.0-liter inline six-cylinder engine. The twin turbo engine is tuned to produce 510 horsepower and 442 lb-ft. of torque. Maximum torque range is between 2,600 and 5,950RPM. Maximum power output is achieved at 6,250RPM, which explains why it is so exhilarating to rev out the engine. Combined with an eight-speed automatic transmission with lightning fast and smooth shifts, the S58 propels the X4 M to 100km/h in just 4.1 seconds. The brutal acceleration is addicting, but the long gearing needed to keeping emissions in check means extra down shifts are needed to get things going. 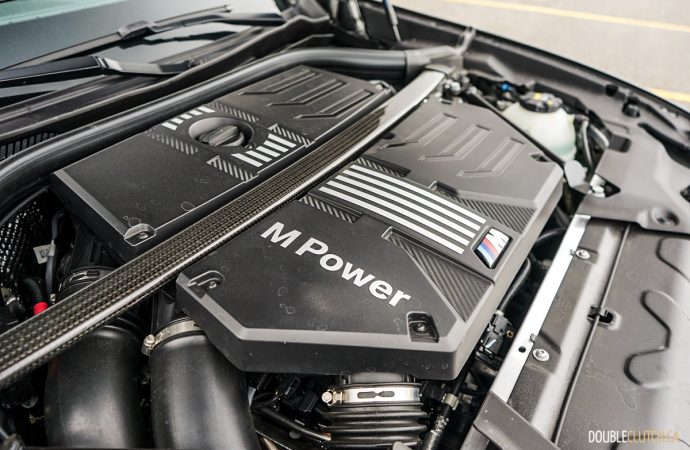 The spirited driving experience is magical. Drivers are always shocked with how much performance is on tap and how easily it is accessible. However, if you plan on testing the X4 M Competition’s limits by using the M xDrive setting which forces DSC off, amateurs need not apply. Don’t be lured into a false sense of security with an all-wheel-drive system, because this is a rear-biased performance system. Even with all the tech and trick suspension, overcoming the weight and height of an SUV platform is not easy.

The harder the X4 M is pushed, the more the hidden weight rears its ugly head. Directional changes are not as crisp as the stiff suspension suggests. The long gearing adds a layer of lag over what is a lively and responsive engine. Despite the inherent drawbacks of an SUV platform, BMW has shown us new heights in the level of performance achievable in a crossover. 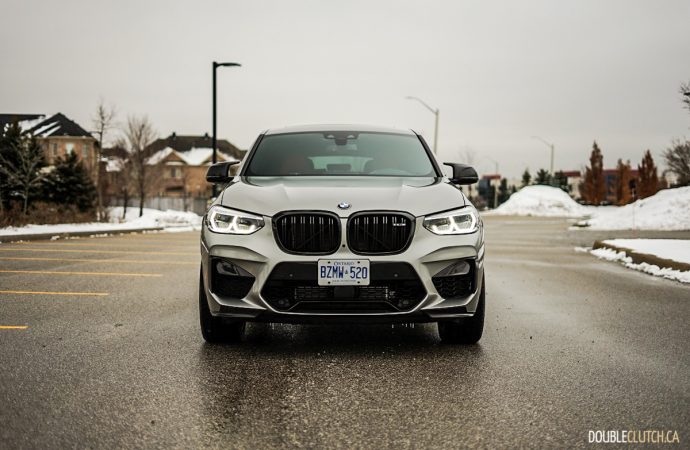 This much performance in a vehicle that weighs 5,510 pounds will never equate to efficiency. We assume buyers of an M product won’t be prioritizing fuel economy either. The combined fuel consumption rating is 14.6L/100km, with respective ratings of 16.6L/100km city and 12.1L/100km highway. My week with the X4M averaged a respectable 15.3L/100km with winter tires, freezing temperatures, and the required 91-octane fuel.

The exterior gets the M treatment as well. The front bumpers are designed to improve the supply of cold air into the engine back to keep the engine cool. The large vents feed air directly into visible oil coolers visible. The vents are garnished with beautiful carbon fiber trimmings. Carbon is used all around the exterior to enhance its motorsport influence including the wing mirrors. The rear end gets a carbon lip spoiler as well as a beautifully sculpted rear valence highlighting the dark chrome quad tip M performance exhaust standard on our Competition tester. The transformation is not as drastic as the M3 and M2 with widened fenders, but the aggressive bumpers set it apart. 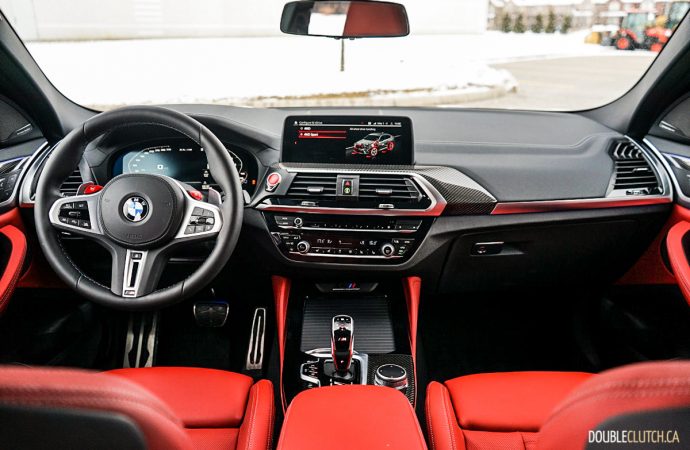 Even though the X4 M Competition is a sport oriented model, the interior is beautifully appointed and equipped with luxury features. The M specific seats set the tone for the interior finished in Sakhir Orange Merino leather with quilted center inlays. The electronically adjustable bolsters let driver customize the amount of hugging from the seats. The M specific shifter and the $850 interior carbon package give the interior a sporty and luxurious vibe.

In the Competition model, the extended leather trim on the door cards, dash and transmission tunnel is standard. Drivers are greeted with the same digital display and infotainment system found in the standard X4 M40i. However the heads up display has M specific rev counter designs. The Interior is largely the same as the standard X4 but with higher quality trim. Luxuries such as ventilated seats and tri-zone climate control are not omitted in the name of weight savings. The combination of luxury details in the X4 reminds you this is still a premium vehicle at heart. 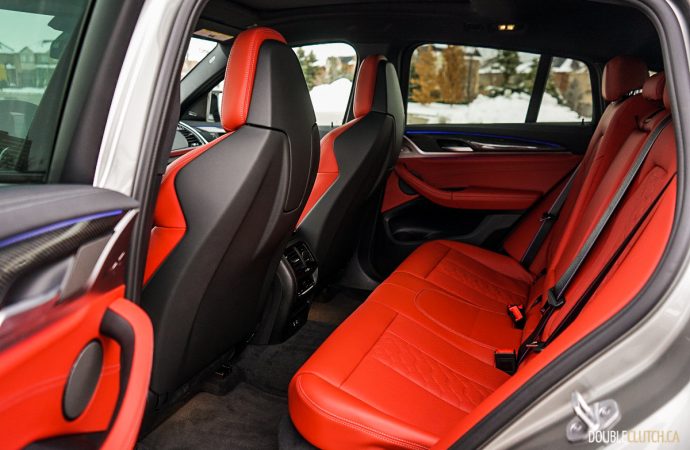 When luxury and high performance are the main ingredients, expect to pony up the big bucks to get behind the wheels of one. The X4 M starts at $85,300, and our tester is the Competition at $95,300. On top is a $10,000 Ultimate Package which fully loads the X4 M with all creature comforts and enhanced safety features. Just when you think there can’t be more options, our tester is also equipped with $750 M compound brakes, $850 interior carbon trim and $895 Donington Grey Metallic paint, for an as tested $108,095.

There is a surprisingly good selection of fire breathing compact crossovers on the market. Mercedes-Benz has the GLC 63S 4MATIC+ Coupe priced essentially the same as the X4 M. The AMG has a slightly more forgiving ride and an exhilarating powertrain with a hair-tingling soundtrack. The Alfa Romeo Stelvio Quadrifoglio is the sharpest handling and full of Italian flair. Unfortunately at close to a $100k price range, the interior falls short of the competition. Alfa Romeo’s reliability record makes it hard for one to commit as well.

The BMW X4 M Competition is like a scalpel with razor sharp precision with track ready performance in the presence of its competition. However it is lacking in the soundtrack hence the emotional stimulus. Even though our tester is already fitted with the M performance exhaust, the tone is mediocre, the crack and pops are muted. The gearbox is quick but too smooth and lacks the snap you expect at this level of performance to give you the sensation of a quick precision shift under acceleration.

Don’t mistaken, the 2021 BMW X4 M Competition is excellent and will get your heart pumping with the speeds you can carry in a straight line as well as in the twisty stuff. However for me it just falls short of getting my blood to boil over. To appreciate the X4 M Competition, it needs to be taken to the track. Are there buyers on the market that is willing to sacrifice daily comfort for a track ready SUV?